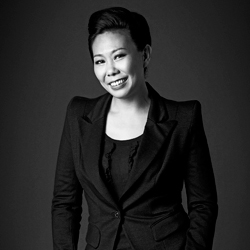 As a driven business woman with a dynamic personality, Irene Ang has been nominated for several awards including; Ernst & Young Entrepreneur of the Year (2004), top 25 Most Powerful Businesswomen (2008) by The Executive Magazine, and as well as being hailed as one of the “Greatest Women of Our Time 2010” by Singapore’s Woman’s Weekly magazine.

Irene currently spends her time as a motivational speaker and host; she was a panel speaker at the Singapore Women’s Congress in 2004, and as an opening speaker in the same forum in 2005. She was also an invited guest speaker at the Global Speakers Summit 2005, organized by the International Federation of Professional Speakers and hosted by Asia Speaker Association of Singapore. She is a speaker with the London Speaker Bureau.

In recognition of Irene’s passion and influence on various local communities, our CEO currently sits on the Media Development Authority (MDA) Singapore’s Media Festival Advisory Board. She holds the honor of being the first Singaporean actress to attend the International Emmy Awards as a member of the jury, joining the elite group of international media superpowers. Previously, Irene was also board member of National Heritage Board (NHB) under the Ministry of Information, Communications and the Arts Singapore (MICA) for a term of 2 years.